Releasing software to the final users is challenging regardless of the programming language of choice. For web apps it requires a web server, for compiled apps it requires a way for distribute the binary and for each one extra steps are needed, in the end the release is just the final step of a long process.

In the old days, applications where deployed via SFTP and required to move file by file in the server, later on git, was used to make the changes a bit easier, without the need to upload file by file then the devops and continuous integration/delivery came to support the agile practices.

Git bot comes to continue the continuous integration/deploy in the development process based on conventional commits and semantic version. Git bot is an attempt to make the boring task to change files (package.json or composer.json) versions for each released an automated process.

The problem with releases

To release a version of a software, usually there is a boring task of updating specific files with the version to be released. For example, a team may want to update the package.json file (version property) with the release they are tagging, for documentation purpose. Then, before a release the developer in charge of the release must remember to follow the rules of updating the file, and after that generate a git tag.

The git bot project is based in two major conventions:

In practice git bot integrates with a git repository and watches through webhook for pushes into a specific branch (or branches) which can be configured through the web interface. Once a push is made git bot receives the commit (or commits) content, and then analyze the commit title for one specific match:

As a first approach the version pattern is constrained to use numeric versions, only, (this is a limitation added just for speed up the prof of concept), for example, the following version is valid:

Therefore, the following version is not:

Once Git bot detects the match, it will automatically push the changes to the files with the specific version. The following flow chart describes the flow that is executed starting from the git repository (Gitlab). 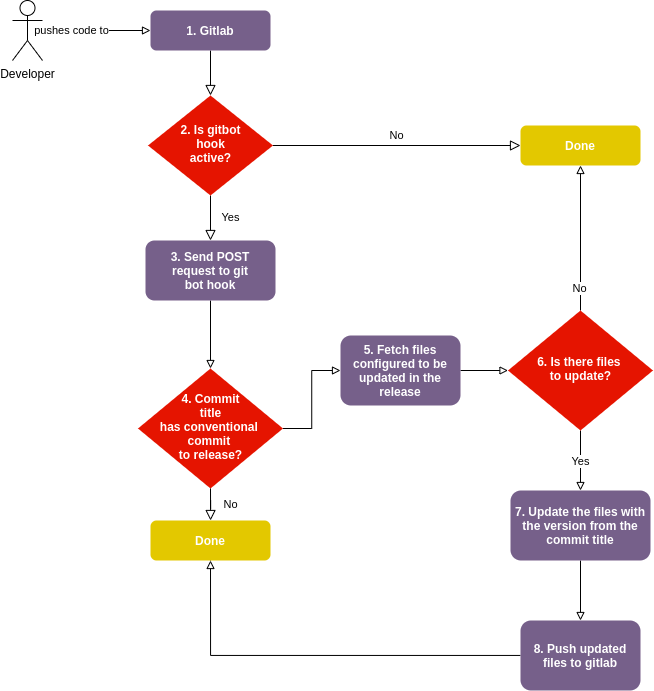 Currently Git bot implementation [2] supports Gitlab only, but it’s core was designed to support other git providers, such as github or bitbucket.