TDD anti-patterns - episode 6 - The one, The peeping Tom, The Flash and The Jumper - with code examples in java

This is a follow up on a series of posts around TDD anti-patterns. The first of this series covered: the liar, excessive setup, the giant and slow poke, those four are part of 22 more, the anti-patterns is a list formalized in James Carr post and also discussed in a stackoverflow thread.

In this blog post we are going to focus on the last two anti-patterns from those lists and also two new ones: the flash and the jumper. Both of them are focused on the practice of test driving code instead of the pure code itself.

Despite the name, The one is the anti-pattern that aggregates different anti-patterns, by definition it is related to The Giant and The Free Ride. So far, we have seen that the anti-patterns are usually combined and it is not easy to draw a clear line when one ends and the other starts.

As we already saw, The Giant appears when a test case tries to do everything at once, in a single test case, in the first episode we saw a nuxtjs snippet that fit the the giant definition.

Therefore, there are some variants on that. The following snippet is extracted from the book xunit [1] and depicts the giant (even though the number of lines are not that many as in the first episode), but instead the giant is figured here because the test case is trying to exercise all the methods at once:

The comments even give us a hint on how to split the single test case into multiple ones. Likewise, the free ride also can be noted in this example, as for each setup, there are assertions that follow.

The next code example might be clearer to see when the free ride appears, as already depicted in the previous episode, the example that follows was extracted from the jenkins repository. In this case, the mix between the free ride and the giant is a bit blurry, but still it is easy to stop that a single test case is doing too much.

Having to deal with global state in test cases is something that brings more complexity, for example, it requires a proper clean up before each test and even after each test case is executed in a way to avoid side effects.

The peeping Tom depicts the issue that using global state brings during test execution, in stack overflow, there is a thread dedicated to this subject which has a few comments that helps to understand better what it is. Christian Posta also blogged about static methods being a code smells. 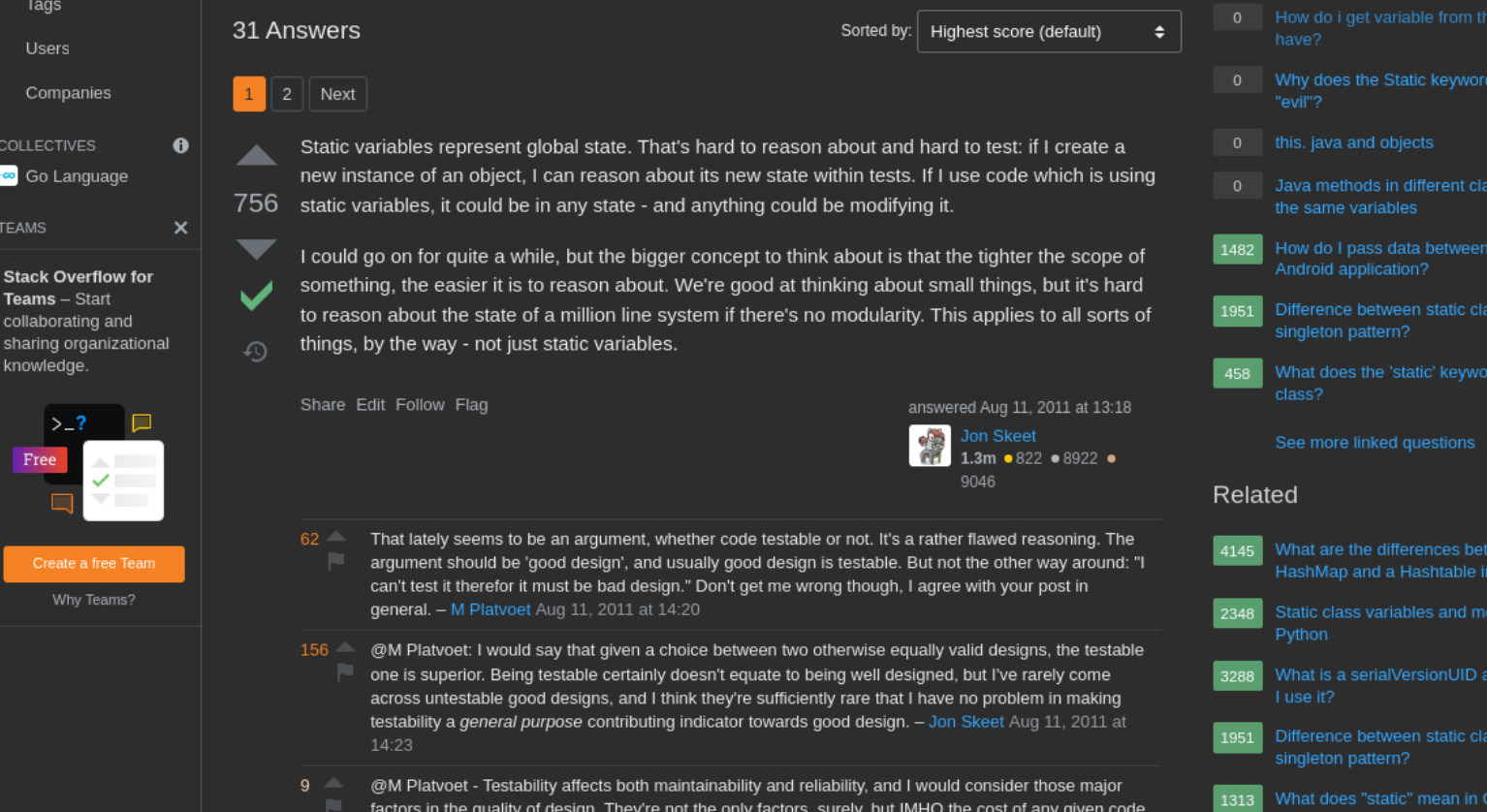 In there, there is a snippet that was extracted from this blog post that depicts how the use of singleton and static properties can harm the test case and keep state between tests. Here, we are going to use the same example with minor changes to make the code to compile.

The idea behind the singleton is to create and reuse a single instance from any kind of object. So to achieve that we can create a class (in this example called MySingleton) and block the creation of an object through it’s constructor and allow only the creation inside the class, controlled by the method getInstance:

When it comes to testing, there is not much to deal with, so for example, the method exposed in the MySingleton called getSomething can be invoked and asserted against a value as shown in the following snippet:

A single test case will pass without any problem, the test case creates the singleton instance and invokes the getSomething to retrieve the property value defined when the test was defined. The issue arises when we try to test the same behavior but with different values in the System.setProperty.

Given the nature of the code, the second test case will fail and shows that it still holds the value abc as depicted in the following image: 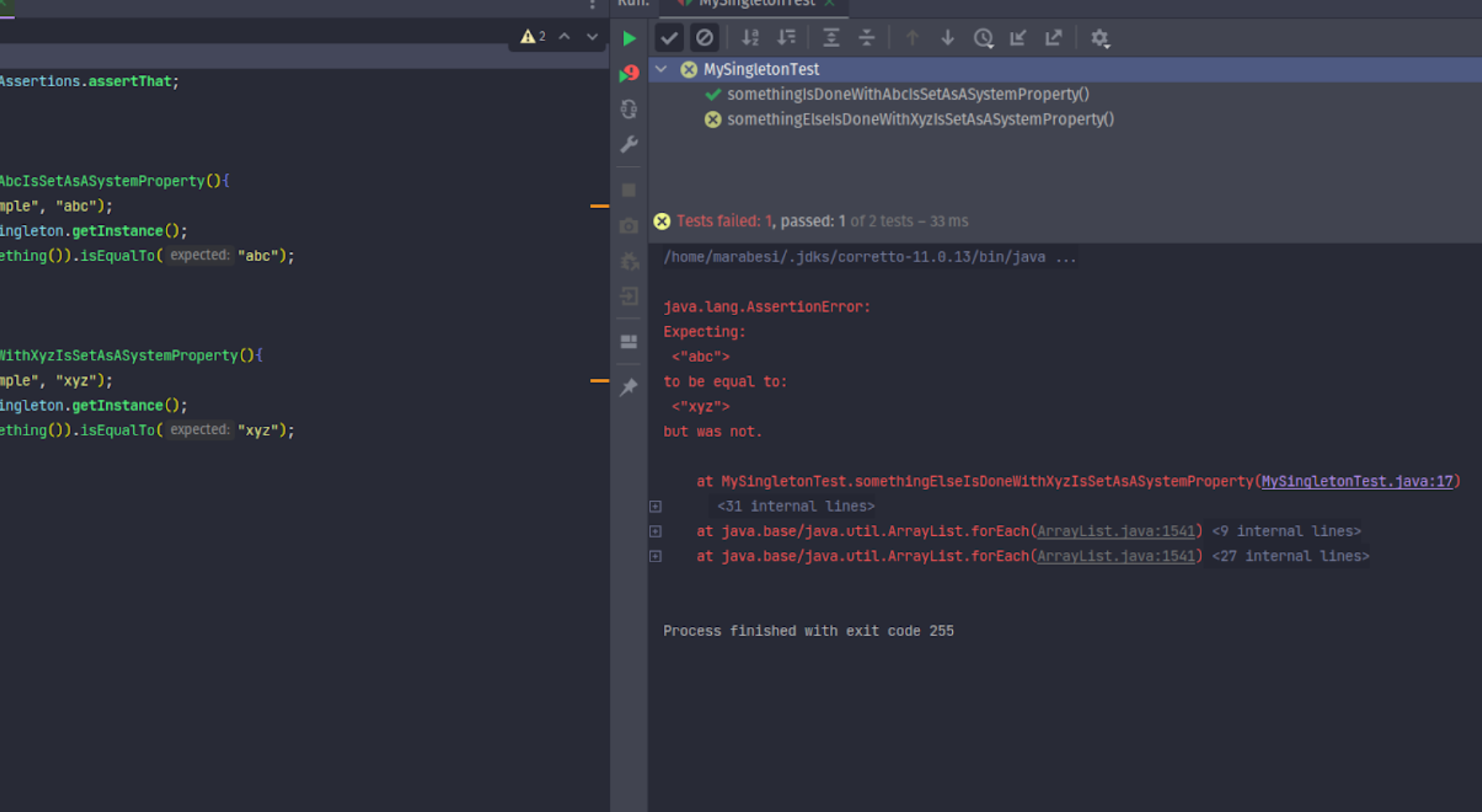 As the singleton guarantees only one instance from a given object, during the test execution, the first test that is executed, creates the instance and for the following executions it reuses the instance previously created.

In this test case is “easy” to see as one test case is executed after the other, but, for testing frameworks that execute tests in parallel or that does not guarantee the test order, it also can fail for different reasons.

As the singleton class has a private property that controls the instance created, it is not possible to clean it without changing the code itself (which would be a change just for testing purposes). Therefore, another approach would be to use reflection to reset the property and always start with a fresh instance, as the following code depicts:

Making use of reflection, it is possible to reset the instance before each test case is executed (using the annotation @BeforeEach). Although this approach is possible, it should bring attention to the extra code and possible side effects while trying to test the application using such a pattern.

Depicting the peeping tom like that, besides having to use reflection to reset a property might not seem to be harmful to test drive code, but it can become even harder when a piece of code that we want to test depends on a singleton.

Developers that get blocked trying to practice TDD, and before splitting up the test in smaller chunks, they are thinking about all the edge cases that the test would cover.

The flash usually happens when someone is starting to practice TDD and start to hush into something before getting the basics in place, basics meaning the TDD flow (which links to the next anti-pattern introduced here).

Besides that, the flash also happens as a consequence of the following:

Big steps are usually the first barrier to start with TDD, what is a small step? What is the right size of a step actually? This could be interpreted as a subjective matter, and it is. But, reaching to the least effort possible to write some tests is something that can be practiced. In the TDD by example, Kent Beck relates the baby steps as follows:

Test methods should be easy to read, pretty much straight line code. If a test method is getting long and complicated, then you need to play “Baby Steps.” TDD by Example [2]

Another approach that usually leads to a blocker on the TDD flow is trying to generalize too much from the start and not talk with the test (or the production code).

The practice of trying to follow the test driven development approach, but jumping up to the next steps of the flow before completing the one before.

To understand why this is an anti-pattern, first we will go over the famous TDD flow and it should be used when coding. The classic approach is to start with a failing test (red), write enough code to make it pass (gree) and then refactor to change anything that is needed to make the code better [2] (if applicable, in the episode number 90, Uncle Bob says that he usually go for red-green may times before jumping to the refactor phase).

Usually the refactor phase is not mandatory as the red-green, refactoring is something that is not that frequent when starting, it comes as the code evolves and as the code needs changes to fit in new requirements..

Therefore, trying to follow those rules strictly usually comes with some assumptions and thus, leads to a difficult flow or even “jumping” steps, so the following section lists what potentially to avoid when practicing TDD.

Those tips in the end come down to practice, if you practice TDD you most likely have faced that before and if not you might face them as you progress. The most important thing to keep in mind is to follow the rules in the flow as strictly as possible.