How to lose your developers - Mindmap around software development, what not to do to lose developers

This post is random thoughts around software development from a developer point of view (strong opinions on the way!). The content covered is mainly based on my career, and the opinions expressed might not fit all scenarios. Do not take the text as a saint grail or a tutorial, it is more like a conversation on what I think about software development, soft skills, hard skills and management.

On top of that, I was inspired by the book Mind Map Mastery from Tony Buzan [1] and also by The software craftsman: professionalism, Pragmatism, Pride by Sandro Mancuso [2], which I share the same opinions as he expressed in the book. 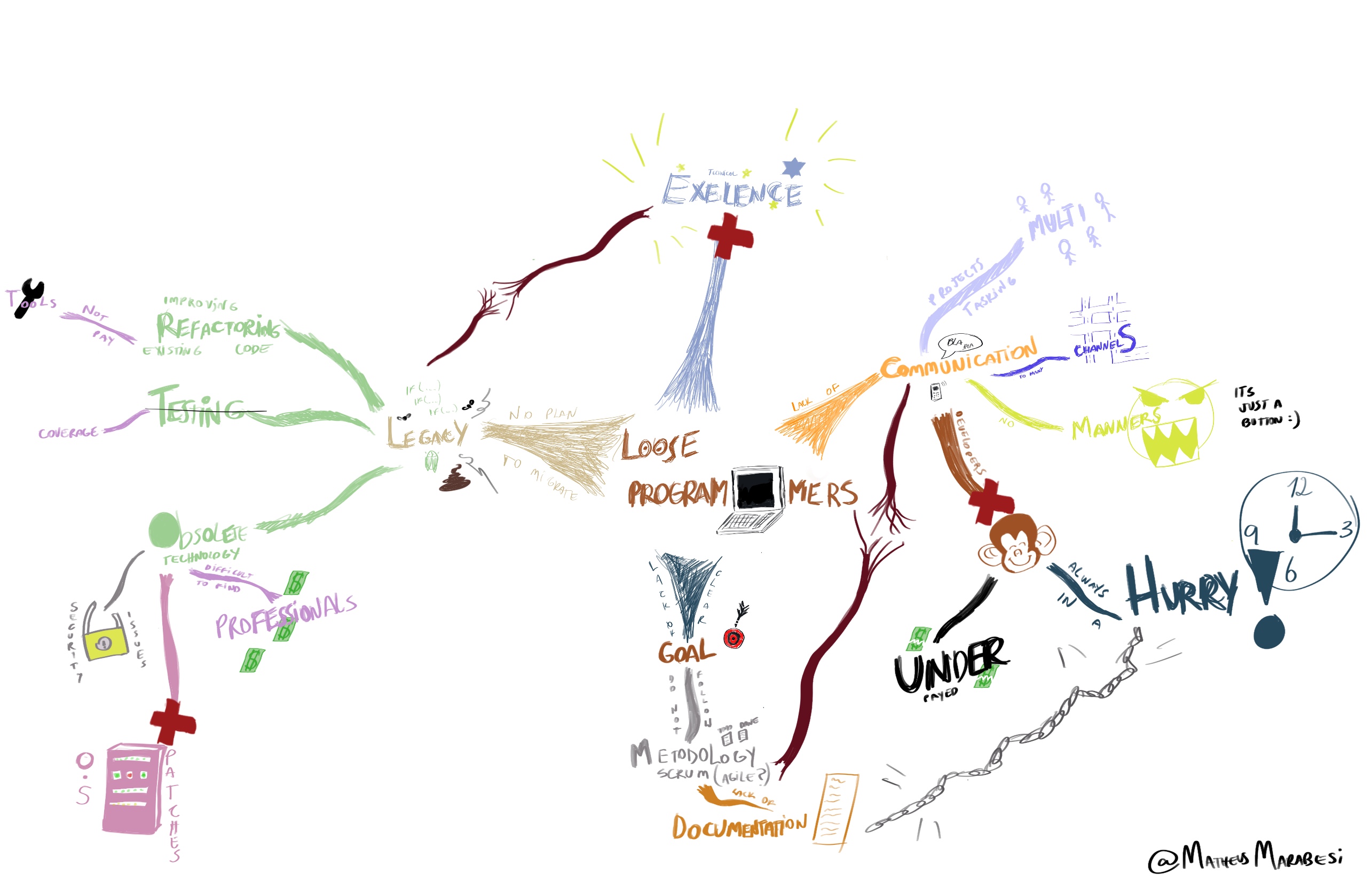 The depicted mind map above is the result of my dive into mind mapping, the subject approach is what this post came to be.

Developers usually start picking up a programming language and playing around it. The “standard” is to have a computer science (or any related) degree and then start working for a company.

Usually the shift from study only mode to working mode brings more responsibilities. For example, dealing with deadlines, struggling with bugs, writing documentation, talking with business and trying out new technologies, build prototypes, research, etc (just to name a few).

The first way to start a not fruitful discussion in the middle of a meeting with developers is to say the phrase: “its easy”. It is a bonus point if followed by “it’s just a button”. This phrase of impact can be taken as two-sided coin, if it comes from another developer, it will be more likely to be accepted, therefore, if it comes from a business or someone that is not part of the daily coding task of developers, it can be interpreted as an “insult”.

I see no problem with those phrases, but, in a given context where developers are working under pressure, having to deal with meetings, support for clients and many other tasks besides coding, it can be a starter for the developer to lose confidence and start the search for another job.

If we were to do a comparison, would we go to the dentist and say that we have is “easy” to treat?

Since the agile manifesto documentation has been a subject of a second matter. Even though, being secondary doesn’t mean to not have it. Teams struggle with outdated documentation (when it exists). I personally think that people misinterpreted the manifesto and uses that as a shield to jump the documentation step. To achieve technical excellence, documentation is needed, as it can be used as a way to share knowledge among the team. The following list enumerates the benefits of having documentation:

The “down” side is to keep it up to date. Documentation should be a commitment to avoid such situations.

You have until Friday to finish up

Imposing deadlines on developers can lead to friction. Developers are not a “code machine”, writing code takes time, creation and problem-solving. Sometimes the step to actually write the code is the last of a chain that starts with the problem to solve.

Imposing deadlines on developers uncovers illness under the hood of the team or even the organization. Imagine you going to your dentist and having the following conversation:

This dialog is weird, as you that have no idea is trying to impose how long the dentist’s work is going to take. Did you find this weird? This is the feeling that developers have when managers start to pressure for sooner deliveries. I would also classify this as a piece of micromanagement. As the HBR article states:

Don’t worry we will test it later

Developers deliver value through tasks, be it in a staging environment or in production, the final word should be from the users, or the ones that are responsible for the feature. It also applies for bug fixes, the one who wrote the bug ticket, should be the one to double-check it and give a positive feedback.

There is a long journey to fix something or implement a new feature. It requires communication both with the business and also code wise, then understanding the code that is in place, modifying it and often, add something on top of it.

It gets worse when the code base is not focused on technical excellence, thus, making the previous steps even harder. [3] Highlights the importance of such technical skills to delivery as fast as possible to the business and increase it competitive speed against competitors.

Let’s say that all the steps have been finished up and the bug or feature has been deployed to staging, on the developer side, it is a lot of expectation because it is the time when the user will see the change and have the chance to play with it. This loop should be as short as possible, and not testing practicing test continuously, can potentially leads to:

Longer feedback circles can also lead to the feature or bug to be reworked and change too may times, as the cycle is long, often it is difficult to keep track of all the changes and make decisions. Gerard Meszaros in his book also quotes project managers as being one of the root causes for such behavior:

It can be hard enough to get project managers to buy into letting developers write automated tests. It is crucial that we don’t squander this opportunity by being sloppy or inefficient. The need for this balancing act is, in a nutshell, why I started writing this book: to help developers succeed and avoid giving the pessimistic project manager an excuse for calling a halt to automated unit testing.

Pack Kua, in his talk [4] enumerates a few ideas that I would like to share here as they are engineering oriented. Those ideas are based on his experience working across different projects and companies.

The part I enjoyed the most is the distinction between the enterprise scenario and the startup, on his talk those are totally different things and he uses that to contrast those two worlds. More recently I came across an article entitled “How to Spread Technical Practices Like TDD in an Organization” by Emilie Bache and one of the key takeaways from the text is shown early on in the article:

One of the success factors for Agile and DevOps is developers changing the way they work and adopting practices like Test-Driven Development (TDD). It’s not something that just happens by itself, and many of the “usual” ways of introducing change fail for TDD. In this article I will outline some of the things I’ve tried that actually do work. I’ll explain “Samman,” which is the coaching method I use with developers.

How to Spread Technical Practices Like TDD in an Organization, Emily Bache 2021

So technical excellence will not come with a magic scrum master, or the shiny new certification from the project manager, this should be the core of the engineering team in any organization. Being agile is not possible if you lack this principle.